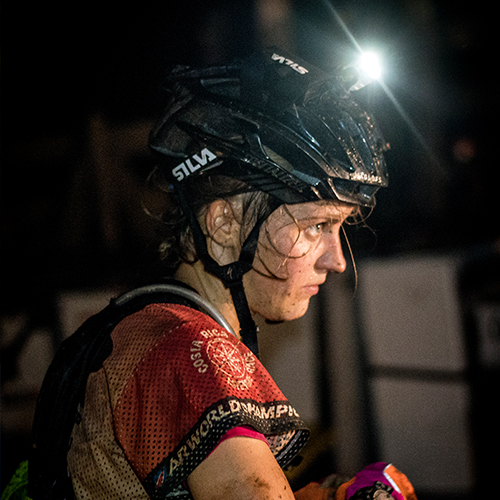 Jossa was born with skis on her feet in Kråkberget in Tärnafjällen. Mamma Elisabeth says that she never learned to walk but started running directly after her two big sisters. She now lives in Kont by the Baltic Sea with teammate Björn, their two kidsa and two dogs. She started her athletic career as a cross country skier and moved onto multisport where Jossan has competed with the team since 2004.

Kråkberget, Tärnafjällen, in your typical Swedish red house with white trim. We were free to roam past the lake below our house and off up Ry mountain, as long as we said beforehand which way we were planning to go.

Ingemar Stenmark, I’d also like to keep my Tärna dialect, even if I haven’t lived there since leaving home. And to still be so fit when I’m over 50!

Norrlandsknäcket in Bjurholm but my first expedition race was Le Grand Tour 2004 in Karlstad.

I can make a pretty mean chocolate cake.

What you will do when your knees finally give out?

Then it’s time to start freestyle skiing or moguls. If the knees are already stuffed I don’t need to worry about getting injured and can go hard.

My first multisport race. I raced with Martina Höök and neither of us could navigate, especially not then. A summary of our race was that we quickly went the wrong way. In the end we threw the map away in frustration. Luckily we went back and got the map, finished the race and continued with our multisport careers…

Acute overuse of my knee in Le Grand Tour 2004. I couldn’t run at all and the last leg 35km of canoeing in a race for first. My teammates dragged me in the canoe through central Sunne and over the finish line – but we took the win!