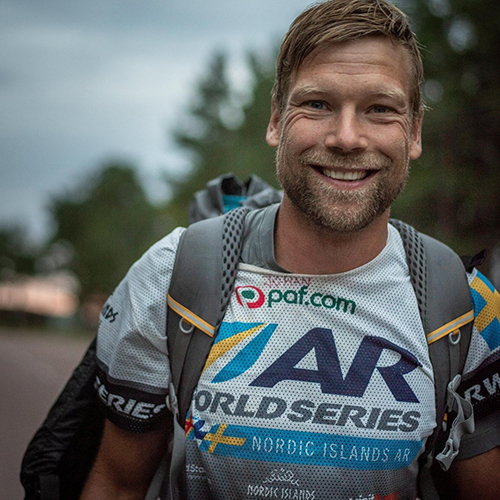 Johan lives in Täby, slightly north of Stockholm, with his wife and two kids. From a young age he has been into endurance sports and long distances. Mostly, according to himself, due to lack of talent in ball sports and sprint speeds. It all started with swimming and orienteering, but soon developed into mountain biking, kayaking, climbing and more as Adventure Racing caught his interest. At that time during conscript service at a long range reconnaissance unit and later officer School the step to get into Adventure Racing was small. Today Johan has over 35 years of experience regarding endurance sports, and 20 years of multisport and Adventure Racing at international level. He is the navigator of the team and has several podium finishes. Johan runs Sweden’s leading test- and coaching operations within endurance sport, Aktivitus, in Stockholm.

Born near Stockholm. Though I didn’t think I would still live there, I do. After spending some years in military service and some time in northern Norway, the path of life got me back to Stockholm. Nowadays I do enjoy life here. Good training and fantastic nature despite the lack of real mountains, ocean and wilderness.

Yes and no. I do get inspired by all those I have met throughout life who do what they do really well and are really into something. You always learn a lot of those. I try to not idolize successful persons in sports. Especially not in my own scene, as I, sooner or later, will have to beat them.

My first Multisport/Adventure race was Archipelago Adventure Challenge in 1999 or 2000(?). One of the first Adventure races organized near Stockholm, in Nynäshamn. I did the solo one-day race. I remember I biked to the start from Stockholm. I won the race and an ocean kayak as the first price. I had to call my dad to come and pick me, a bike and a kayak up late in the evening…

A year later I think my first longer Adventure Race was ‘Arctic Circle Traverse’ in the north of Sweden. Starting in Jokkmokk, passing Voullerim and finishing in Luleå.

During later years I have started listening to Death Metal/Trash Metal. Don’t ask me why, but its just awesome!

What will you do when your knees finally give out?

I will get myself a pair of Japanese plastic knees and start playing golf. I don’t know why… I don’t even like golf…

I run Aktivitus in Stockholm, the leading test and coaching operations within endurance sports in Sweden.

In 2011 we did the ‘Alpine Expedition Race’ In Zwitzerland with start and finish in Interlaken. A hard course with long sections on high altitude. We raced among the three top teams really hard. After the race I was totally smashed. I fell al sleep in a to small bed in like a wardrobe. Somehow I got my feet higher than my head. Waking up with a swollen head face that I couldn’t open my eyes. I didn’t see anything until it got slight better later that day. Took me weeks to recover.

My worst physical performance I believe was in 2016(?) in a AR world Series race in Wyoming, US. Due to a combination of bad form, infection, and altitude I simply sucked. I was so bad. Those days when you just want to quit sports.

I try to bring as normal food as possible, dry food. All kinds of chocolates works good and especially Swedish style chocolate balls ‘Delicatoboll’. I think I have had thousands of those trough the years… And Coke! I forgot Coke. No matter where you are in the world, in any remote village you will always find Coke and Hineken. Of all sport drinks out there, Coke and salt does it all for me.

Plenty of really good races. Favourite course is still Explore Sweden in Sweden and Norway in 2006. One of the best course designs ever and an awesome terrain. With my team at the time, the longest international race we had done and we did it very well.


The strongest memory though, more of the love-hate kind, is the Adventure Racing world championships in Brazil in 2015. That was something else. Extremely hot and we traversed one of the worlds largest wetlands for three days, Pantanal. Just to stay in progress along the course was a struggle. Finally, we ended up on 3rd place after six days of non-stop racing and an aggressive sleep tactics. Will never forget that race.