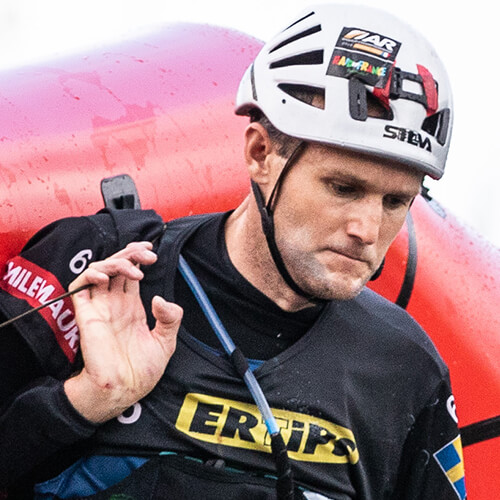 Grew up in Christchurch, New Zealand. Lived for many years in Göteborg, Sweden, but are now back in NZ with his wife Sara and kids Karin, Greta and Tor. Aaron joined the team in 2008. Aaron parents were some of the original multisporters, so he grew up with the sport and doesn’t know any better than to go out and race hard. Has been on the podium (often highest up) in most major international multisport competitions.

In Christchurch, which is the finish town for the Coast to Coast (Multisport World Championship for individual competitors) and a hub for multisport athletes.

The southern Traverse in 1996 in mum’s team. One of her teammates got pretty bad frostbite snowshoeing in Alaska and they needed a last minute replacement…

Well it’s actually a quite well known fact- I complained about having a sort butt and so Kathy Lynch told me I didn’t have a cyclists asshole. Now I try not to complain too much.

What you will do when your knees finally give out?

Hopefully I can start taking the kids to training before that.

Getting cold in on a ridgeline in the Takatimu Ranges in the Southern Traverse in 1998. After that I decided not to be a mountain climber.

Coast to Coast 2006, I can’t really remember the last hour then passed out on the finish line. After a night in hospital they decided that I hadn’t had a heart attack and let me out just in time for the prizegiving.

I still remember when I was seven crewing for dad in the Cost to Coast when he won, that was pretty motivational.

The best scenery was probably the world championships in Norway / Sweden in 2006. My favourite race must be TWALK.